These hot days....trying to draw on paper with sweaty hands....it's been the perfect time to pull out the Neko Case records and sing while working! And then I found this on the intertron....from Neko's own house in Vermont, the Flow Tante Wera Wingchair by AK-LH, a French design company. VERY limited edition (supposedly only 7 in production!!), all signed and numbered. Abode NYC has them...I wish I had one. The circulatory system never looked so comfy.
Posted by Utopian Moth at 7:20 PM

Indonesian artist Arkiv Vilmansa has new works on display at TAG in Los Angeles in a show titled "The Aftermath: A Journey to Wounderland". The former architecture graduate favours working in a style bound by sweeping calligraphic line work reminiscent of hotrod pinstriping, combined with fields of saturated colour. Within the paintings are his own dreamlike characters, imagined "species" of animals that inhabit the new ecosystem that might evolve from the aftermath of global warming. In "Wounderland" these cartoon-like animals display their plumage and fur in intense gradations of colour - in fact, they positively vibrate off the canvas. But all are offset by a new depth in Arkiv's work, a dark background insinuating the bleakness of environmental disaster.

Alongside the paintings at "The Aftermath" are Arkiv's figurines, limited edition prints, shirts, custom VANS shoes, skateboards, and a really neat tote bag, available for sale at the gallery (some stuff is on the website too.)


Arkiv will continue to show throughout Asia for the rest of the year, but next year will hold his first European show in Paris at Seven Gallery. Follow him through his website, www.arkivart.com
Posted by Utopian Moth at 5:24 PM

This month's full moon fell on Lughnasadh, and while looking for artwork to inspire I discovered Jacek Yerka, a contemporary surrealist from Poland. Working in acrylics, he paints these fantastical compositions full of mystery, also with an incredible eye for detail. His landscape settings draw on his life in the Polish countryside, and they are heavy in dreamlike atmosphere, while his topsy-turvy representations of interior spaces display a reverence for the everyday objects that occupy our lives.

It's worth looking at Yerka's website to appreciate how accomplished he is as an artist. Plus his own explanation of his working process shows a great sense of humour. Limited edition prints of his paintings are also available through the site.
Posted by Utopian Moth at 1:52 PM

The last of a breed 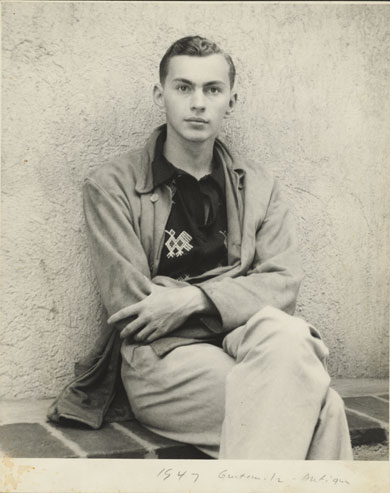 "As the Greeks sensibly believed, should you get to know yourself, you will have penetrated as much of the human mystery as anyone need ever know."
Posted by Utopian Moth at 11:23 PM

For those who remember "The Munsters", Eddie, son of Lily and Herman, loved his doll, "Wolfie". I recently tattooed a representation of the prop for a client who loves "horror" characters and is building a collection of permanent tributes to Dracula, and the Frankenstein story. I worked from a photo of a modern reproduction of the doll, and wanted to inject more realism into the tattoo, as if the doll character has "come to life!" There are a few versions of "Wolfie" on the market, but apparently Butch Patrick, who played "Eddie" has the original and sells remakes via his website. 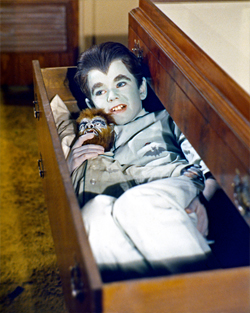 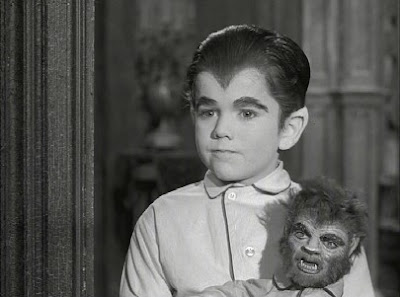 "The Munsters" was only in production for 2 years (72 episodes), but over the following decades became a cult staple. Re-runs screened heavily in Australia when I was a kid, and for some reason, I actually preferred it to its rival "The Addams Family", which to me seemed too "clean" looking. I know as I got older and heavily into the goth scene, Lily's "look" seemed more authentic than Morticia's - the heavier, sexier make-up, the eyebrows, the hair with the streak....to me she was television's Goth Queen!! And Yvonne De Carlo's amazing bone structure carried off the image so brilliantly. She was already in her early forties when Yvonne took up the role, after a none-too-shabby Hollywood career, including a role in Cecil B. DeMille's epic "The Ten Commandments". With a face so beautiful AND expressive - those eyes and those lips - "Lily Munster" probably has ended up being De Carlo's most memorable role.


A few years ago, a good friend of mine and fan of Yvonne, commissioned me to tattoo a portrait of the actress on her shoulder. Here she is in "beach girl" mode....far removed from the setting of "The Munsters"!!

(The contours of the shoulder make it hard to photograph and there is some distortion.)

Portraits like this are still so much fun to do. But to do a cool Lily? Oh, now we're talking!! I'd be in seventh-heaven....

"If there's anything I can't stand, it's weird people." Lily Munster

During a coffee pit stop the other day, I spied this basket, filled with wax-sealed vials of golden honey. 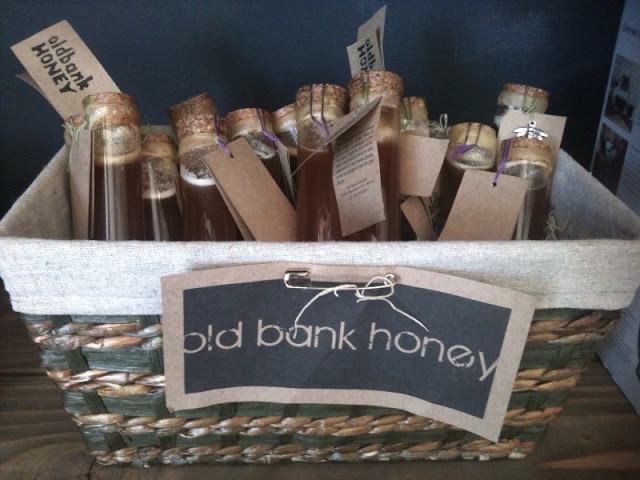 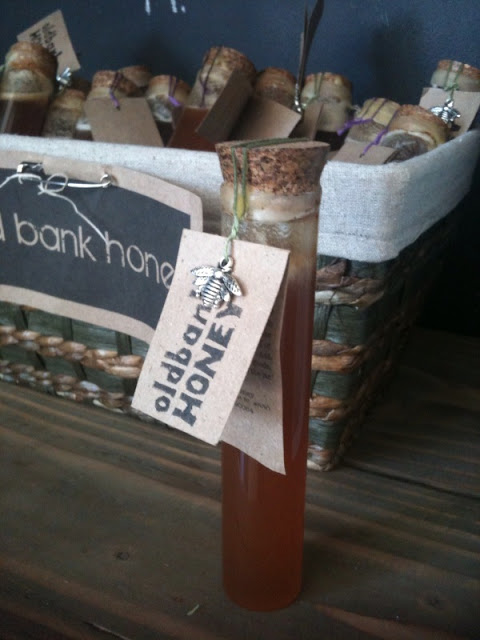 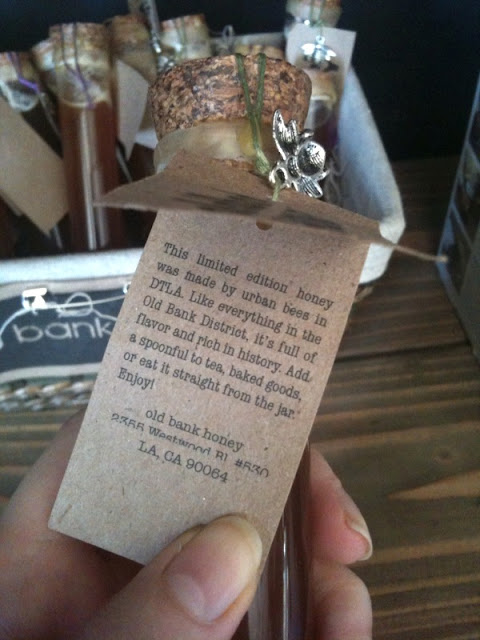 These bees seriously have some view! Their hives sit atop a building in downtown LA, and are tended by Corey Brill and friends. Coffee Commissary in West Hollywood (801 N Fairfax Ave) is selling the honey to the public. I don't think you could get much more local than this.

For more info on the Old Bank District Bees, visit their facebook page, or watch the video to see the bees and their surrounds.

In light of recent news that the United States EPA has denied a petition to cease sales of clothianidin, a neonicotinoids class of pesticide that is suspected of being harmful to honeybees, now is as good a time as any to be reminded of the importance of bees to our agriculture industries. Colony Collapse Disorder (CCD) has been widely reported amongst apiarists, and scientists are looking at all possible causes, chemical influence included. To begin to understand the potential stress that CCD has on our food sources, and on the chain of food supply, you could start by watching the documentary "Colony: The Endangered World of Bees" (2009). Equal parts informative and alarming, the documentary follows a group of beekeepers over 18 months as they struggle with the collapse of hives and the economy.

It's no surprise that a growing number of "everyday" people are getting involved in trying to save bees and managing their own hives, as perhaps we are finally acknowledging how vital to our own survival these fellows are. And they work hard for us - did you know a single bee visits around 2 million flowers to produce 450g/1 pound of honey? Bless the bees! 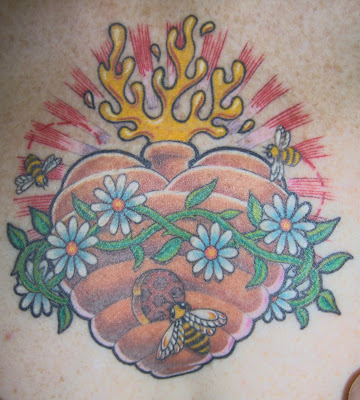 This is an oldy I pulled from the archive (it's at least several years old) but I am still fond of this tattoo I did - a sacred beehive right on Sarah's sternum. Painful for her, but a cute bee tribute all the same. I do love those tattoos inspired by the nature around us.
Posted by Utopian Moth at 6:30 PM 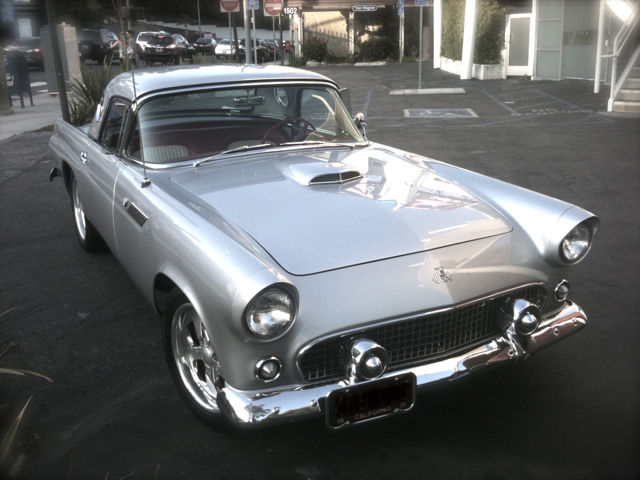 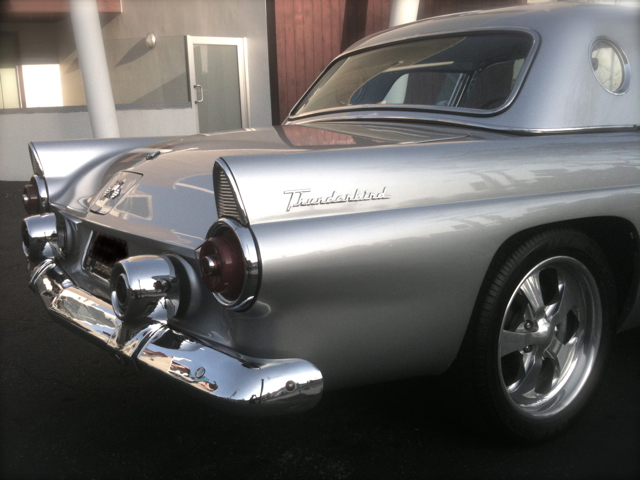 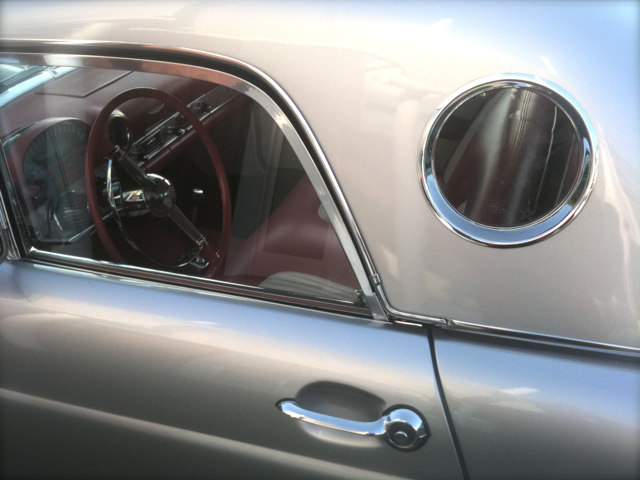 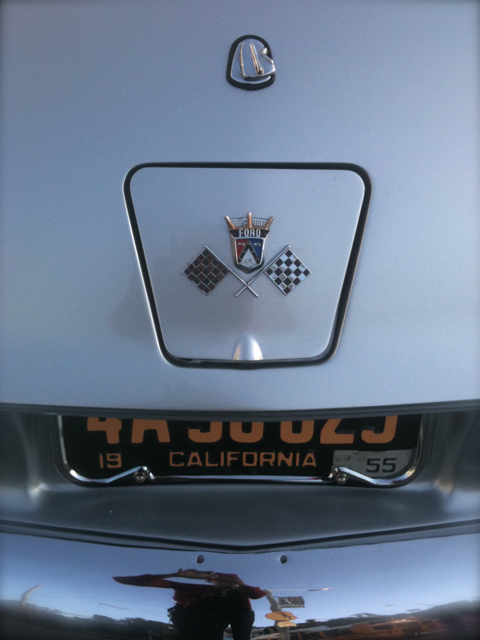 Always parked in our neighbourhood! And looks like a 1955 model with the '56 porthole windows.

The 1955 Ford Thunderbird was the world's first "personal" car, designed to compete with the Corvette. The first generation 2-passenger T-birds were considered instant classics, and became cultural icons. Not quite a true "sportscar" but marketed to the individual driver with its luxurious detailing, the model was tweaked quite a bit from this period into 1957, and in 1958 T-birds were available with air-conditioning. To me it's still such a beautiful mid-century car - sleek, minimal and modern, and stylish.


John Samsen worked for Ford as a designer at the time this new car was being developed, and tells the story of how the distinctive shape was modeled. He shares some of the original concept sketches and photos of the clay models in this article posted on Dean's Garage blog. His recollections are pretty fascinating. Imagine playing a part in the making of an icon?